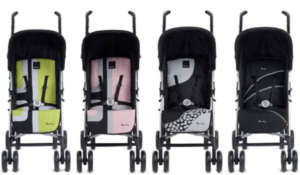 What was once just an object with wheels to get your baby around has now become a million dollar industry: Prams. They’ve become a part of the yummy mummy culture with the media snapping pics of celebrity mum’s pushing them, magazines promoting them and mum’s talking about them!

Due to the media and advertising influence, designer prams have been marketed as  a status symbol. Pushing a bugaboo is a reflection of your wealth and success right? Um, no, it’s just an expensive pram. Most people can own a designer pram regardless of whether they can afford it or not – that’s what credit cards and debt are for!

However, a shift is taking place! Thanks to the celebrity trend of baby wearing! Suddenly mums are taking an interest in slings and baby carriers and the associated philosophy of attachment parenting.

When I gave birth to my second son, I bought an upright baby bjorn baby carrier but found it awkward. It hurt my back and I worried about his wobbly newborn head not having enough support. I also convinced myself he could suffocate in my cleavage!  So when I had my third child I thought I’d try a sling. I LOVED it! It felt so natural to have my baby close  and it left my hands free to push my other two boys in the pram. I had 3 kids aged 3 and under so it also made me feel that my baby was getting the nurturing and attention he needed.

So, What do slings have to do with attachment parenting?

Attachment parenting is about promoting positive attachment (bonding) between mother and infant based on the knowledge that children require this relationship for their development and well being.  Positive attachment can be supported through breastfeeding, co-sleeping and baby wearing – basically any practise that keeps baby physically close. It’s not wacko hippy science – it’s just what comes naturally.

Why is baby wearing so special?

Inspired by the knowledge that in most cultures babies are carried instead of wheeled, baby wearing is now an evidence based practise supported by developmental and child psychologists around the world.

According to the babywearer – Babies who remain close to their mothers

Slings and baby carriers are much cheaper than designer prams and have lots of benefits for both mother and child.

Even if baby wearing isn’t for us, let’s toss aside the ridiculous notion that a certain type of pram makes us (or someone else) a superior parent. It’s simply just our popular culture trying to place value in products instead of actual parenting.

For more info on baby slings and carriers check out our ethical shopping directory for more details.