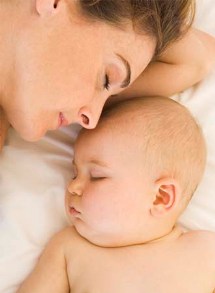 When I had my first child, I was adamant he would never be allowed in my bed. I read  horror stories in parenting magazines that convinced me that co-sleeping was dangerous, old school and most definitely not for me! So strong was my paranoia, that I NEVER breastfed him in bed for fear of falling asleep, dropping or squashing him.

With my second child, when he woke for an early morning feed I would feed him in bed instead of getting up. I loved the closeness of our morning cuddles but I wasn’t about to make a habit of it.

However baby number 3 threw a spanner in the works. My precious newborn cried constantly sleeping only 20 minutes at a time in obvious pain and discomfort. The ONLY thing that would settle him was to have him permanently attached to my boob. And so, in order to get some sleep I would take him to bed with me at night and he would suckle until settled and then drop off. We ended up co-sleeping until he was 12 months old.

I was surprised at how much I enjoyed having him in bed with me. It felt so natural and normal to have my newborn so close and be able to hear his quiet breathing. I loved not having to get up to check him or settle him and as a result, got a better nights sleep! He still woke frequently for feeds but settled almost immediately and I could doze (or sometimes sleep) while he fed. I believe it had a positive impact on our bonding and attachment in those early weeks and certainly limited the ‘stress’ of having an unhappy baby.

I found I loved sleeping with my baby so much I wanted to learn more about it. So I started to do some reading on the subject and was delighted to find that there are huge amounts of scientific evidence to support co-sleeping.

I was surprised that despite the scientific evidence to support co-sleeping, our ‘cot’ culture is so strong that it remains an unpopular choice.

When co-sleeping is practiced according to safety guidelines..

So where should my baby sleep? It’s up to you. However, be encouraged that if other options don’t ‘feel’ right then co-sleeping may be the right choice.

I’ve shared my story in the hope those who are thinking about co-sleeping or who already practise this will be confident to make that choice regardless of popular opinion.

I was a sceptic – but am already planning to co-sleep with our next bub!