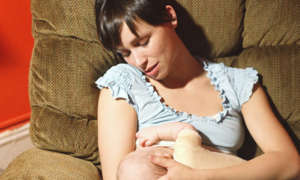 Australian breastfeeding rates are among the lowest in the world.  An article in the Adelaide Advertiser reported that although 92% of women try to breastfeed only half make it to three months and only 14% to six months.

So today, I want to ask some questions to kick start discussions on this topic.

So, why are the breastfeeding rates so low?

What factors influence these rates?

When I had my first child I didn’t give a single thought to whether or not I would breastfeed. I focused so much on the birth and setting up his deluxe wardrobe that it never occurred to me that I had to feed him. Thankfully, the midwives were very encouraging and didn’t give me an option. Given my ignorance at the time, if they had given me a choice I probably would’ve chosen formula.

While in hospital, my bub developed jaundice and had to be admitted to the special care nursery. The nurses started feeding him formula which of course, I didn’t question. Upon going home I was handed a tin of formula to continue his top up feeds.  Given breastfeeding seemed foreign and odd to me and my baby was fussy and had a poor latch I found myself staring at that tin of formula wondering if it might be easier just to bottle feed him. I didn’t want to make a hasty decision so visited the Australian Breastfeeding website. As I began reading articles about the benefits of breastfeeding I realised that breast milk was amazing and there was no way I was going to offer my son anything different while I had a choice. I threw the can of formula in the bin.

Most mothers work at least a little these days so this has to have an impact.

I did the whole expressing at work thing and it was quite honestly awful so I don’t blame mothers who find it all a bit overwhelming. I was working in an aged care facility and told to find a quiet spot to express. This was fine except the wandering residents with dementia always seemed to find me! On one occasion an old lady popped her head in, became distressed and started  screaming that something was attacking me as staff came running only to find it was just a breast pump. I can laugh now – at the time it wasn’t so funny!

Does working make a difference? What about wanting to maintain a life and go out from time to time but feeling tied down? What about the popular feminist stance made public by Elisabeth Badinter who suggests breastfeeding is dis-empowering because women cant’ get out of the house to do things they enjoy on their own? What about the sexualisation of breasts? Does that play a role as a cultural influence?

We can’t blame the media and advertising for everything (or can we?). Clearly, there needs to be more encouragement, support and follow up for mothers who want to breastfeed. But I wonder whether the advertising and marketing of formula (through the guise of toddler milk or follow-on formula) has more impact than we care to realise.

Most of us mothers are intelligent human beings who don’t make parenting decisions based on one TV commercial. However, formula has well and truly etched its way into our consciousness despite the strict advertising standards.

With my recent birth I was given a bounty bag full of advertising. I looked through it for research purposes. Do you know what they give to new mothers these days? A sample of formula. Oh hang on, it’s actually toddler formula because it’s against regulations to give infant formula samples. But these companies know that it doesn’t make a difference because they’ve put the brand out there, the idea of formula into the mind of a vulnerable new mum and therefore the option.

This is merely the beginning because the next time we go to the supermarket we have to walk passed the cans of formula to get to the nappies that we all need. It’s called strategic product placement. Yes, there’s a name. And then of course there is toddler milk advertising in magazines and all over the TV. Does advertising and marketing influence breastfeeding rates despite regulations? I believe it does.

But what about the media? Inflammatory articles such as this entitled “why bottle-fed babies are better behaved” and bottle vs boob stories seem to pop up in the mainstream media on a regular basis. How we choose to feed our babies has suddenly become controversial as to whether breast REALLY is best which plants a seed of doubt in our mind.

There are many factors that influence breastfeeding rates and we need to examine them carefully.

This is merely a beginning point for a much longer, in depth discussion on these topic….so stay tuned.

So, what do you think are the reasons behind Australia’s low breastfeeding rates?