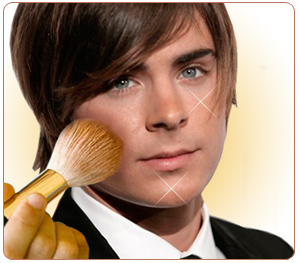 Make up on men? Rockstars, freaks or Geeks?

This week Harrods removed pink and blue aisles and signs saying “girls” and “boys” in favour of a more neutral approach to selling toys. Of course, the traditional girl and boy toys are still there but displayed in a way that allows kids to explore what interests them not what is stereotyped. It’s a step in the right direction. In line with this theme was the story about a couple who raised a completely gender-neutral child.

So, is making everything gender-neutral the way of the future?

My husband and I talk a lot about how the world is changing when it comes to gender and stereotypes.

My husband was at the beach over summer and remarked that for the first time in his life he felt self-conscious. He said he felt like a gorilla surrounded by hairless (waxed) young men.  Apparently, it is no longer okay to flaunt a natural male body complete with chest and yes, back hair!  He had a similar experience working as a volunteer for a community garden project where young men rocked up with straightened hair, didn’t know how to use a shovel and were clearly uncomfortable with getting dirty. He felt frustrated that these young men just weren’t being, well, men.

Perhaps we’re getting old but we have a chuckle or two about how ‘young people’ present themselves these days. Young men just seem to try so hard when it comes to fashion and hair styles walking around with their waxed eyebrows and man bags.  I’m sure there are many men who find this shift somewhat empowering but there’s nothing wrong with a man being, well, masculine.

These days it doesn’t seem to matter whether your homosexual, metrosexual or heterosexual because everyone just blends in to one big confusing cultural melting pot that is heavily influenced by the fashion and beauty industry.

Our little boys are growing up in a world where they are now targeted by the fashion and beauty industry. Now, just like our girls, boys are forced to battle against popular culture to find out who they really are.

I don’t want to see young boys or men denying their masculinity to blend in with a culture that is trying to make them more feminine. Although empowering for some, it is dis-empowering for many.

What’s wrong with being gender-neutral? It means denying we have a gender and one that comes with unique strengths and abilities that should be embraced and celebrated

Being aware of gender stereotypes is important but we also need to be aware that going completely gender-neutral is laden with the very same issues we are trying to avoid.  Encouraging complete gender-neutrality results in children feeling they need to deny who they are, their masculinity or femininity, to be more, well, neutral. Men and women ARE different. Our brains are wired differently, we have different hormones, we see the world differently and yes, we have a different set of strengths and weaknesses.

I know some argue about social conditioning but I have three boys and they are each very different. They are growing up in an environment where we never encourage or discourage anything based on gender. My eldest is gentle and sensitive but my other two boys are physical, intense, energetic, loud, passionate and would rather ride a bike or kick a footy than play with a dollhouse. I allow them to explore who they are and learn to love their boy-ness. I feel no need to say “Son, when you grow up you can become a ballet dancer if you want – it’s okay with me!” because I’ve created a culture in my home where my kids are free to be themselves.

I don’t want to push or influence my boys to be more feminine under the guise I’m being open-minded – I just want them to be who they are.

So, this is why I’m a little wary of the term gender-neutral. Our children should be encouraged to be themselves regardless of gender and the influence of our industry-generated popular culture.

Let’s get rid of unhealthy stereotypes but let’s embrace and celebrate our gender and help our kids to do the same!

What do you think?

Are boys encouraged to be more feminine these days?