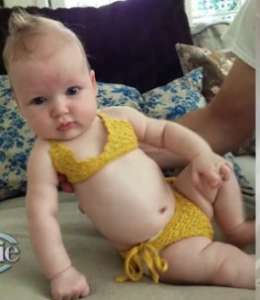 In the media there has been a recent stir over Jessica Simpson releasing a photo of her 4 month old daughter wearing a bikini. On first glance, it’s actually kinda cute. I mean, look at that little face and those beautiful chubby little legs! However, it’s a baby wearing a bikini. A bikini.

To be fair, Jessica Simpson is a celebrity and as we know, celebrities don’t really lead ‘normal’ lives. She isn’t knowingly doing her baby any harm. She just has a skewed perception of what is appropriate. After all, she has built a career around her own sexual attractiveness. It’s built into her belief system. It’s how she sees the world and how she sees the value of herself and girls (women) in general. It’s just sad to see this idea being passed down a generation and also into the wider community through the sad reality of celebrity influence.

“It is very disturbing to see a young baby presented to the world wearing a bikini. Celebrity choices carry great influence, as can be seen by the manner in which their accessories and manners are copied widely.”

He continued “It is hoped that parents will understand that ‘baby bikinis’ are totally inappropriate and that they contribute to the sexualisation and commercialisation of childhood.”

Celebrities are NOT role-models

I recently had the opportunity to discuss girls clothing with a marketing team from a popular clothing chain. I was asked what sort of role-models I would be encouraging for my daughter and was given the example of Miley Cyrus (pictured). I told them that when it comes to role models I will be teaching my daughter to look into history to find women who have done something great.  I will NOT be encouraging her to look to celebrities for inspiration.

One of my friends recently shared that her 7-year old daughter went to a school book-week celebration dressed as Helen Keller! When most little girls saw it as an opportunity to dress up as Princess Jasmine or Cinderella – this inspirational young girl decided that Helen Keller was a person worth emulating. This story warmed my heart. The world needs more little girls who are being raised with the confidence to step away from popular culture to look to the strong women of history as role-models. It’s little girls like this who will change the world!

We need to teach our children to look to the right role-models. To look to the people of history who have shaped the world and made a positive difference with their lives…. and keep them away from shallow and morally bankrupt celebrity culture.

The sexualisation of childhood is not okay

There are plenty of parents who think this is all nonsense.

This is because so many of us have been born and raised in a highly sexualised popular culture so we don’t know any different. We think it’s normal and don’t always stop to question it. In fact, many of us have been brought up believing the very lies that we are trying to protect our children from. Lies that say we have more worth as a person if we are attractive to the opposite sex and that fashion and beauty somehow defines us. We then unknowingly (like Jessica Simpson) pass this on to the next generation of women.

I want to believe for something better for my daughter.

The book Getting real: Challenging the sexualisation of girls argues that girls should not be objectified in this way and that children have the right to a childhood free from subversive and manipulative exploitation. It shares a message that all parents need to hear and a message that I want to see get out there!

a grassroots campaigning movement against the objectification of women and sexualisation of girls in media, advertising and popular culture.