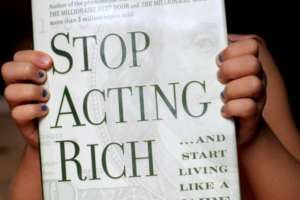 I recently read a review on the new book “Stop acting rich and live like a real millionaire“. The key point was that people who are truly wealthy (money wise) aren’t obsessed with labels, brands and status symbols.  They are wise, live frugally and put money away. Aspirationally rich people spend (waste) their money on keeping up the appearance of wealth and in the end aren’t really that rich.

It got me thinking about how much our industry-generated popular culture has influenced our perception of success.

Somewhere along the lines we have been taught to believe that success equals being rich. Of course, if you are really good at what you do, work in a highly specialised field or happen to be an entrepreneur then you have most certainly earned your wealth. Having money isn’t a bad thing of course, it just depends on how much you allow it to define you.

Just because you are rich it doesn’t mean you are successful.

Some people inherit money from their families and therefore live off their parents (or grandparents) hard work.  Paris Hilton anyone?

There are so many people who work hard, make a difference in people’s lives but don’t get to carry the title of being a success. This is because they don’t earn truckloads of money. In fact, many may struggle financially.

Teachers, nurses and social workers are sadly undervalued in our culture. We  instead look to arrogant entrepreneurs as role models rather than those whose occupations carry meaning beyond monetary value. A social worker who lovingly supports the needs of those in the community is rarely a person we encourage our children to emulate. Our focus often turns to encouraging our children to be doctors, lawyers or engineers because these occupations help people but they also happen to make a lot of money! I’ve been guilty of this myself.

Popular culture and the appearance of success

What sort of message do our children receive from popular culture? Success is reflected in what you wear, drive and what you own. Do you want to impress those around you? Then you need lots of money to  spend on products and brand names. It’s really just about giving off the appearance of success.

Can’t afford a designer handbag? Then hire one so you can appear wealthier and more successful than you really are! The fact there is demand for this service reflects how shallow and meaningless our culture is becoming. Since when is a handbag something that communicates your worth to another human being.

I say, if you can’t afford a designer handbag then buy a cheaper one.

Passing the perception of wealth to our children….

I was recently involved in a discussion on an online forum about what brand names people bought for their kids. The parents who said they didn’t care about brand names were accused of socially isolating their children. One person commented “I buy them the brand names they want because I don’t want them to be left out”. In other words,  she bought brand names because she wanted her child to fit in.

No one wants to deliberately alienate their child to prove a point but what sort of message does this send to kids. It says, whether you like it or not, what you wear and how you present yourself determines whether or not people will like you. It plants a seed in a child’s heart. A seed that then grows until they become a teenager and adult who believes that brand names and products define or reflect who they are.

We need to raise our children to know that money doesn’t equal success. We need to encourage them to look to those who serve our communities and to place value on what these people do for others. I want my children to draw on the inspiration of mother Teresa, my friends who are teachers and social workers and those who our culture forgets to acknowledge.

There’s nothing wrong with having money or being financially wealthy but it shouldn’t define success or replace the value of building strong character.